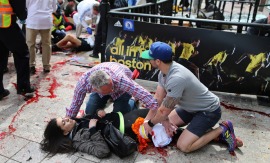 On Monday, a horrific tragedy happened in my city. Multiple bombs exploded in Boston, killing two people and leaving at least 110 injured. The two bombs went off at the finish line of the Boston Marathon, leaving a truly gruesome scene in their wake. Hundreds of shocked competitors and spectators fled the heinous aftermath in panic. Many of the victims were covered in blood, and others lost limbs.

A day that should have been full of fun was instead fraught with dread and pain.

But Boston is a strong city, full of tough people. They will help the victims whose lives have been forever changed. They will mourn together. They will heal together.

And then the politicians will act. New “proposed legislation” will be pitched from different levels of government. We will probably hear predictable speeches in the coming days that sound something like this:

“We cannot just passively grieve, and hope that something like this does not happen again. Something must be done, so that the tragedy in Boston never repeats itself. Government has the responsibility to step in and make the difference that it can, to secure the safety of this nation.”

All the well-intentioned laws in the world could never prevent every tragedy. But politicians will predictably push for new security measures, because doing something seems better than doing nothing. When does more government security become too much? There are already government video cameras watching us on practically every street corner.

Excessive security would only make the lives of law-abiding citizens less free.

It is already happening.

Today, speeding drivers are automatically mailed tickets after being filmed by mounted municipal cameras throughout the cities.

We are required to remove our shoes before we get on a plane due to the actions of a failed terrorist, Richard Reid (AKA the “Shoe Bomber”).

Little old ladies in wheelchairs and toddlers are having their privacy eroded with invasive frisks at airports.

Where does it all end? Do we really want to live in an Orwellian society where government knows everything about us? Would this really make us free?

Terrorist attacks like the one in Boston are impossible to prevent 100 percent of the time.  Terrorism prevention does not lie in new, silly government procedures. Instead, the United States must throw off the shackles of politically correct protocols, and have the ability to rationally profile potential terrorists. The Israelis have developed a remarkably successful profiling procedure focusing on behaviors, not race. But our TSA agents follow goofy rules intended to not offend anyone. These procedures may result in every seventh passenger being patted down, whether it be a boy scout from Wisconsin or an elderly senior citizen wearing adult diapers.

Despite the attacks on Beantown yesterday, we still live in a remarkable city. This week is a time for mourning and reflection. But as we recover, let’s hope our sanctimonious politicians do not further erode our freedom with new, well-intentioned, ineffective laws.

This article was originally written for The College Conservative.