Government welfare is well intended, but it can make poor people comfortable remaining in poverty. Why pay your own way when Uncle Sam will pay it for you?

Food stamps, or in USDA parlance, the “Supplemental Nutrition Assistance Program (SNAP),” is an expensive and bloated welfare program. A temporary and effective safety net to help struggling Americans put food on the table undoubtedly makes sense, but SNAP has spun out-of-control.

15% of the US population is on food stamps, but some states rely on the benefits more than others.

The Wall Street Journal points out that in some states, nearly a quarter of the population relies on food stamps. Mississippi and Washington, DC top the list of food stamp enrollment “by state,” at 22% and 23% respectively. 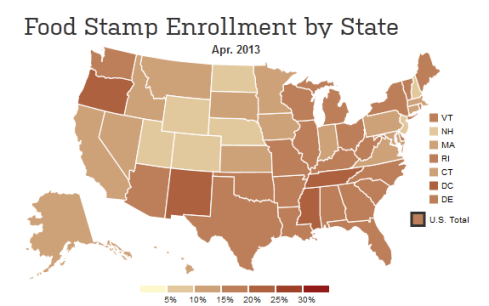 The USDA is so set on expanding SNAP that it spent $43.3 million to advertise food stamps in 2011 alone. Government-produced, colorful commercials enthusiastically encourage people to sign up for the subsidies.

Moreover, the commercials portray food stamps in a wholly positive light. To be sure, government efforts to distribute food stamps should not demean recipients. But there is a better balance to be struck between safeguarding the dignity of recipients and making them feel that the SNAP assistance is an admirable, unqualified entitlement.

The commercials show up frequently on various television and radio stations. Here is a radio ad produced by Obama’s USDA, telling listeners that food stamps will make them “look amazing.”

Some ads are produced by state governments. This television commercial produced by New York tells people food stamps are “a quick, easy, confidential way to get help.”

It would be easier to swallow the heavy expense to taxpayers for ads promoting SNAP if the program itself were not already grossly out of hand.

There are even SNAP ads targeted at illegal immigrants.

Documents obtained by Judicial Watch revealed that the USDA works with the Mexican government to promote participation by illegal immigrants.

As Judicial Watch reported, “The promotion of [SNAP] includes a Spanish-language flyer provided to the Mexican Embassy by the USDA with a statement advising Mexicans in the U.S. that they do not need to declare their immigration status in order to receive financial assistance.  Emphasized in bold and underlined, the statement reads, ‘You need not divulge information regarding your immigration status in seeking this benefit for your children.'”

SNAP is also ridden with fraud. Many individuals trade their food stamps for cash and drugs, but the government does little to address this issue.

SNAP recipients receive Electronic Benefit Transfer (EBT) cards, which look and function like a debit card but are only supposed to be used to purchase food.

Despite EBT cards’ intended use, a simple search online pulls up countless discussion boards where people discuss how to trade the benefits for cash.

Here is a discussion thread from Yahoo Answers: 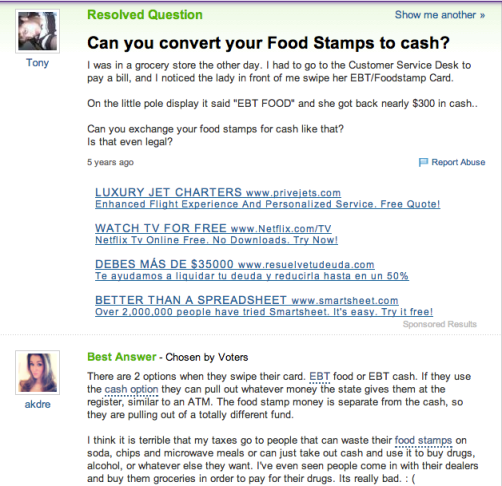 Making matters worse is the fact that SNAP is often counterproductive by discouraging work. When a recipient starts making too much income, they lose the benefit. The incentive to find a job is gone.

Some liberals assert that food stamp use is up because the economy is bad, but that is simply not the case. Food stamp spending nearly doubled years ago, before the current recession. The program’s budget rose from $19.8 billion in 2000 to $37.9 billion in 2007. Congress should means test the food stamps program much more aggressively to focus on the truly needy, while eliminating disincentives for individuals to go to work.

This is certainly one of the most pressing issues facing the nation. But it receives almost no coverage from the so-called mainstream media.

What will it take for the media and citizens to wake up? Will it take 50% of all citizens receiving food stamps? 75%?

Americans have become obsessed with the “1%” and “99%.” They should instead focus on the 17% taking from the 83%. That is a statistic worth protesting in our public parks.