Libertarian activist Adam Kokesh has been in jail for 114 days (92 of which he was held by the feds) with no bond, no bail, and no trial. 57 of those days were in solitary confinement.

Clearly, this Kokesh fellow is a dangerous threat to society… Right?

Nonsense, say many of those who know Kokesh well. In fact, they argue that Adam Kokesh is anything but dangerous.

Let’s start with the facts: On July 4, Kokesh uploaded a video of himself loading a shotgun in Freedom Plaza in the District of Columbia. With the Capital building behind him, the activist said as he loaded his firearm, “We will not be silent; we will not obey; we will not allow our government to destroy our humanity. We are the final American Revolution. See you next Independence Day.”

D.C. gun laws are some of the strictest in the U.S. As reported by ABC News, “The District has a litany of laws on the books that make it more difficult to obtain some firearms, impossible to obtain others, and illegal to carry any loaded gun in the city.” Just being in D.C. with a loaded firearm, even if it is legally registered, is a violation of the law. D.C. laws also ban gun owners from carrying firearms openly or concealed in public.

On July 9, not even a week after producing and uploading his video, Kokesh’s home was raided by a SWAT team.

Carey Wedler, Kokesh’s girlfriend, was at his home at the time of the raid. She was in the shower when it began.

“I was washing my hair in the shower when I heard Adam scream, ‘The police are here!’ I threw a skirt on and left the bathroom… there was smoke everywhere because [officers] had thrown a flash grenade,” she said. “I walked to the top of the stairs. They pointed guns at me and told me to put my hands up. Cops were streaming into the house and you could hear helicopters above.”

The next few hours were a hellish daze for Wedler, Kokesh, and his six employees who were also in the home during the raid.

Wedler said, “There were about eight of us total. Activists would come stay with him, and he would give them free rent in exchange for work. The officers cuffed us — we kept asking why they were arresting us and they wouldn’t answer. Adam kept asking for a warrant and they refused to show it.”

The cuffed group was forced to the ground for hours as the raid took place.

“Most of the cops covered up their badges. It was so shady,” Wedler said.

She also recalls how harshly the cops treated them. “One of our guys had his cell phone and was trying to record what was happening. Some of the cops noticed, pushed me out of the way, then punched the guy in the head,” she said. “At another point Adam asked to use the restroom and he got kicked.”

Wedler had asked to use the restroom repeatedly throughout the incident — it was “that time of month” for her. After asking officers if she could go to the bathroom several times an “officer told me a female officer was coming to escort me to the restroom. She never came. Out of 30 police officers there, not one was a woman.”

Finally, after several hours, some male officers took her to the upstairs bathroom. “Blood was dripping down my leg. All these male officers were watching me,” she said. 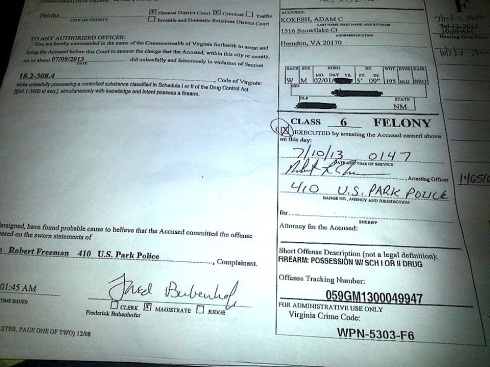 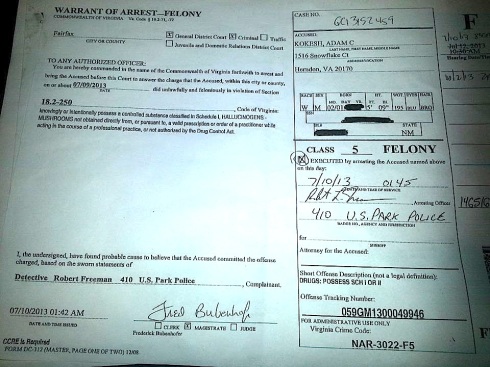 Wedler vehemently insists that Kokesh never used “shrooms.” She said, “I know that Adam doesn’t do shrooms. I can say, whatever they found, I never saw it in Adam’s house.”

Phillips, who was not present during the raid, said the situation is “very odd.” He said, “The month previously Adam was arrested twice and got off because the state didn’t have a good enough case. The police hate him. This time, they knew they had to get him on something. So it is very likely that they actually planted mushrooms on him. When Adam made the D.C. video, he expected attention from police. We knew police were coming, so why would we leave drugs out? We had actually done a clean of the whole house because we expected police to show up.”

He also mentioned that “Adam has never even spoken about, nor does he like mushrooms.”

Wedler said that Kokesh’s house was left completely destroyed after the raid. Here are some images of the home after the police cleared out at 1am:

On Wednesday, his attorney, Peter Cooper, quit the case without giving a reason. Those close to Kokesh are shocked.

“Cooper is a buddy of Adam and represents him whenever he gets in D.C. trouble,” said Phillips. “There’s no reason for him to just leave other than [the feds] got to him. He was scared away by the government basically. The court appointed Adam a new lawyer who has no idea what he is getting himself into. They obviously do not want him to have a good lawyer, and we had a good lawyer.”

Wedler said, “I imagine we’ll find out why Cooper left later, but for now they can’t discuss it.”

Still, what frustrates both Wedler and Phillips more than anything is how harsh the police have been while dealing with Kokesh’s case.

Phillips said, “If you went to D.C. and shot someone, you’d probably get bail. They didn’t give Adam bail — and he didn’t threaten anyone or hurt anyone. He was only making a political statement.”

“While everyone may not agree with Adam’s way of doing things, he is and has always been very peaceful. He has never been a dangerous person,” said Wedler.

“As strong as Adam is, I talked to him yesterday and he didn’t sound very good,” said Phillips. “They could keep him for ten years if they wanted to. And they will — they want him out of the picture. They don’t have to explain themselves to anybody. They can do whatever they want.”