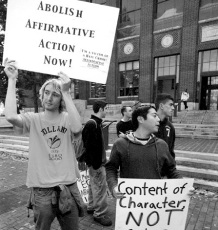 Should a white person be given preference to college admissions because he is white? Of course not. That’s racist. So why are admission preferences given to any specific race?

In the 2003 case Grutter v. Bollinger, the Supreme Court ruled that race could play a role in admissions policies of universities that receive federal money (even if only in the form of aid to students). This “positive discrimination”, known as affirmative action, attempts to compensate for historical racial discrimination by giving minority applicants a “leg up”. But these policies are currently being challenged by a case before the Supreme Court, Fisher v. University of Texas.  This new case asks that the Court overrule Grutter, which would end government-imposed affirmative action at American universities.

Affirmative action is a form of racism. These policies, intended to benefit minority students in the United States, only feed into the same racist machine that they are supposed to counteract. Well-intentioned affirmative action measures are inherently racist by giving benefits based on skin color, not merit. Such policies are divisive rather than uniting, and lead to perpetual victimhood. Affirmative action was needed in the ‘60s and ‘70s, but now these policies unnecessarily treat today’s minorities as victims.

If a college wishes to promote diversity on its campus through affirmative action policies, fine. Private organizations and companies (including colleges) should have the freedom to adopt whatever admissions policies they want. Racial, sexual orientation, and religious diversity only enriches the educational experience on campus. But government-forced “positive discrimination” is racist and counterproductive.

Affirmative action often hurts its beneficiaries more than it helps, by placing minority students in programs above their abilities. Scholars euphemistically coined the term “mismatch” to refer to this outcome. Mismatch suggests that students who get into a top school with the help of affirmative action would be better served attending a less competitive school, where they could gain admission through their own merit and achievements. Supreme Court Justice Clarence Thomas, who admits to benefitting from affirmative action himself, saw firsthand how racially-based admittance policies negatively impacted black students. He said, “I watched the operation of such affirmative action policies when I was in college, and I watched the destruction of many kids as a result.”

According to Thomas J. Espenshade, a Princeton University sociology professor, a black student with a virtually identical application to a white student receives the equivalent of a 310-point bump in SAT scores. This generous advantage potentially hurts the black student by placing him in a program where he is more likely to struggle or fail out. It is therefore no surprise that significantly fewer minorities end up graduating than whites. This stands true at private colleges, but the problem is especially pronounced at public universities.  At the University of Wisconsin, for example, 81 percent of white students graduated compared to only 56 percent of blacks.

Placing minorities into programs they are not qualified for may be a contributing factor to their high unemployment rate. The black jobless rate, for example, is about twice that of whites. A student who struggles in an academic program that he is not qualified for is less likely to succeed in the job market. For instance, an unprepared student who is placed in a rigorous engineering program may retain less of the essential knowledge to be successful in that field.

Does the mismatch theory suggest that minority students should be prevented from attending elite universities? Absolutely not. Rather, it asserts that students of any race (minority or not) do not necessarily benefit from attending a top school if they are not academically on par with their peers.

There is also unspoken resentment among some in the white community who may assume that minority students were accepted because of affirmative action policies, not merit. Eliminating these policies would dispel such racist assumptions.

There are undoubtedly countless bright, promising minority students across the country who would be assets to elite universities. To argue that minority students need a “leg up” to gain admission is offensive, and suggests that these young people cannot succeed on their own. Fisher v. University of Texas may result in the elimination of government-imposed affirmative action in universities altogether. This would be a significant step towards a truly equal society, where individuals are judged on merit, not race. As Martin Luther King Jr. once said, “I have a dream that my children will one day live in a nation where they will not be judged by the color of their skin, but by the content of their character.”