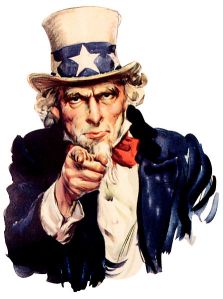 Why pay for your own stuff when you can get it for free from Uncle Sam?!  Government serves meals, provides housing, gives out electricity, schooling, cell phones, hospitalization, computers, medication, gasoline, and almost every service imaginable. Sounds pretty nice– I’ll take one of each!

But all that “free” stuff is actually paid for with your tax dollars. And the government is spending more on these handouts than it can afford, continually worsening the debt crisis in this country– and in case you haven’t heard, we’re now more than 16 trillion bucks in the hole. Ouch.

Despite the high price tag of government handouts, it seems logical to think that they are beneficial at a time when many Americans suffer financially on a daily basis. However, poverty levels have not decreased even though our spending on government payouts continues to go up each year. The truth is, government handouts do not usually yield the desired results.

I am completely in support of a temporary, effective safety net in place for struggling Americans who need a hand up. But government handouts and entitlements are often ineffective, limitless, and out of control.  According to a new study by TrimTabs, payouts from the government now make up more than a third of total salaries and wages of the U.S. population. Sadly, these payouts have made tens of millions of Americans dependent on the federal government. These people await the morsels tossed to them from Washington each month. Although this largely contributes to our national debt, bureaucratic politicians love this system because it allows them to “buy” votes by promising more handouts.

Below are some statistics that I find particularly disturbing.

Government dependency is a dangerous thing. Instead of giving people the tools that will help them escape poverty, these handouts only make poverty more comfortable. We must remember what the Constitution stands for and our founding fathers’ wishes- they did not want the government to have much power at all.

There are millions of Americans that are deeply suffering right now and they need to be helped. But government payouts are not the solution or the path to prosperity. We must reduce the size of government and create an environment where business can grow. This would produce more jobs and give our country a chance to thrive again.

What are your thoughts?

6 thoughts on “A Nation of Dependents”