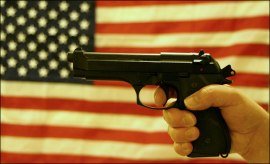 Since the Sandy Hook shootings, we frequently hear that we need more and stricter gun legislation. Emerson’s President M. Lee Pelton penned a letter to President Obama asking that “urgent attention be paid to developing measures that would have the effect of curtailing easy access to assault weapons,” Surely, stricter gun laws will help to lower gun violence in America. Right?

The incident in Connecticut was devastating, of course, but stricter gun laws are not the magic solution to preventing future tragedies. Emotion must be put aside to objectively assess the effectiveness of strict gun laws. The data overwhelmingly demonstrates that stricter gun control does not yield lower crime.

If gun control were effective, Chicago would be the safest city in the country. Prior to 2013, Illinois was the only state where carrying a concealed weapon was illegal. In December, federal judges struck down the ban, ruling it unconstitutional. But now Illinois lawmakers are working to pass other gun regulations, like an assault weapons ban. Despite a history of strict gun policies, Chicago is one of the nation’s most violent and deadly cities. In 2012, there were over 500 gun-related deaths in Chicago. That is up over 10 percent from the rate in 2005. Gun control is clearly not working in the Windy City.

Houston is similar to Chicago in socioeconomic factors like population, density, and racial segregation. Both cities are plagued with drugs and human trafficking. Chicago and Houston are America’s third and fourth most populous cities, respectively, each with between 2 and 3 million residents. Non-whites make up 50-60 percent of the population in both places, and the poverty levels in each city are almost identical at just under 30 percent. Yet in 2012, there were only 217 murders in Houston — less than half of Chicago’s death toll. A major difference between the two cities: Houston has very few gun laws. Criminals there know that many citizens are well armed for self-protection.

Gun control advocates have good intentions, But good intentions do not always yield positive results. Strict gun laws do not work because they take guns out of the hands of only law-abiding citizens. These civilians are then left with few ways to defend themselves against armed criminals, who do not follow laws. It is absurd to think that banning guns would stop a criminal from possessing them. If that argument worked, no one in America would posses or use illegal drugs. Banning something does not make it go away.

Despite the obvious evidence that goes against their appeals for gun laws, politicians frequently exploit the gun issue to enact more government regulations and control. Many politicians use emotional appeals to push aggressive laws. During his State of the Union address, President Obama used the massacre in Newtown to vehemently demand stricter gun control.

Obama proposed background checks, magazine limits, and banning assault weapons (which he inaccurately refers to as “weapons of war”). “Assault weapons” are defined by cosmetic features only, like folding stocks and barrel shrouds. Assault rifles, on the other hand, are produced for military purposes.

The propositions made by the President would not have prevented the Newtown shootings. Adam Lanza might not have passed a background check, but this is irrelevant since he stole the gun from his mother. A magazine limit would have likely been ineffective as well, since reload time takes a mere 3-5 seconds. Similarly, a ban on semiautomatic rifles would have been a moot point. Connecticut already had such a law, and it did not stop Lanza from gunning down over twenty innocent schoolchildren.

The president’s emotion-based rhetoric uses the Sandy Hook victims to try and convince people to support policies that would not have prevented this event in the first place.

If Obama and other gun control advocates were serious about “protecting our children,” they would discuss public swimming pool safety (drowning is the number one cause of death among young children). Gun related murders are far down on the list of causes of child mortality. Even the National Public Radio, hardly a fan of the National Rifle Association, acknowledges that school violence has decreased considerably in the last two decades. In fact, the violent crime rate in general has dropped significantly over the past 20 years, while firearms sales have risen.

Advocates of gun control need to start thinking with their heads, not just their hearts. Such horrific violence and its causes should be studied intelligently to discover effective solutions. Having an honest discussion about violence in our society is healthy. But enacting new, kneejerk laws after each tragedy is not the answer.

This article was originally written for the The Berkeley Beacon.